The Crimean Bridge is the longest in Russia. On a global scale, it is а unique object, a set of various complexity solutions.

One of the tasks during the construction of the object was to find the solution for base soil stabilization in bridge / shore zone on the Taman Peninsula side. The need to improve the stability of base soils with safekeeping the free flow of groundwater was based on the following factors:

Upon the customer’s initiative, the contest for the technology with the best stabilizing result was held on site. Several tests spots were organized there, different technologies were applied, and control tests were carried out. The winning technology was chosen according to the next parameters:

According to the analysis and estimation of efficiency, the best results were performed by the technology of soil stabilization by means of sand or crushed stone piles. The technology was later chosen to execute the work.According to the project documentation, the stabilization of the motorway and railway embankment soil by means of crushed stone piles was carried out.

According to the project documentation, the stabilization of the motorway and railway embankment soil by means of crushed stone piles was carried out. The main characteristics of the project: 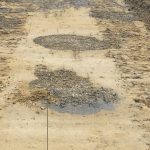 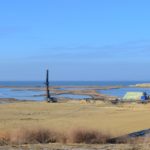