The multifunctional geotechnical system (MGTS) GEOIZOL-MP is a universal system that allows you to assemble and manufacture various geotechnical elements from a limited set of components: soil anchors, soil dowels, anchor bar or root micropiles. 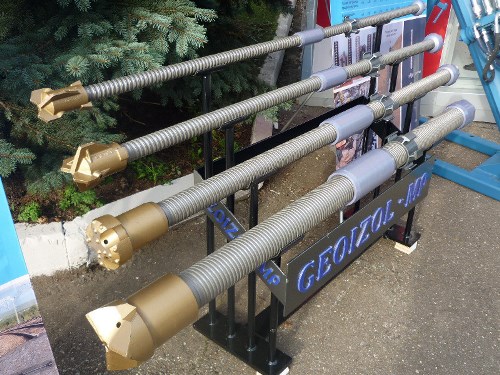 GEOIZOL-MP – flexible system with a wide range of elements

The own development of the GEOIZOL Group of Companies is comparable in quality with the best world samples. Produced at the Pushkin Machine-Building Plant from domestic steel grades with higher performance compared to foreign counterparts. The use of MGTS GEOIZOL-MP complies with the requirements of Russian building codes and regulations. 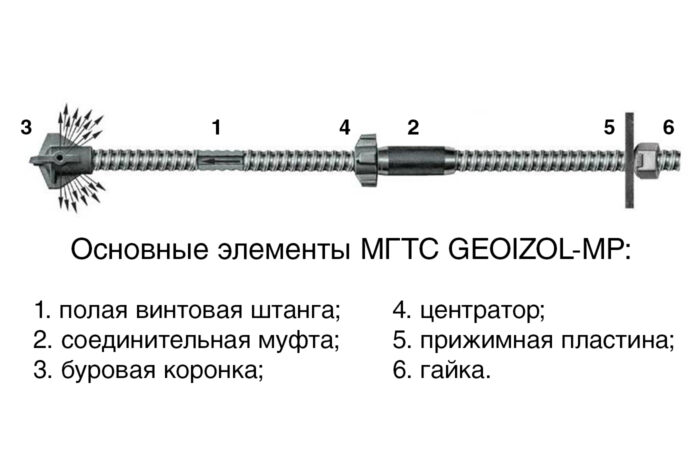 Main elements of MGTS GEOIZOL-MPMGTS consists of cored screw rods (1), connected by couplings (2). The first segment is equipped with a drill bit (3). With a prescribed step, centralizers (4) are installed to place the rod in the center of the well. The configuration, composition and availability of fasteners (5, 6) vary depending on the specific use of GEOIZOL-MP. 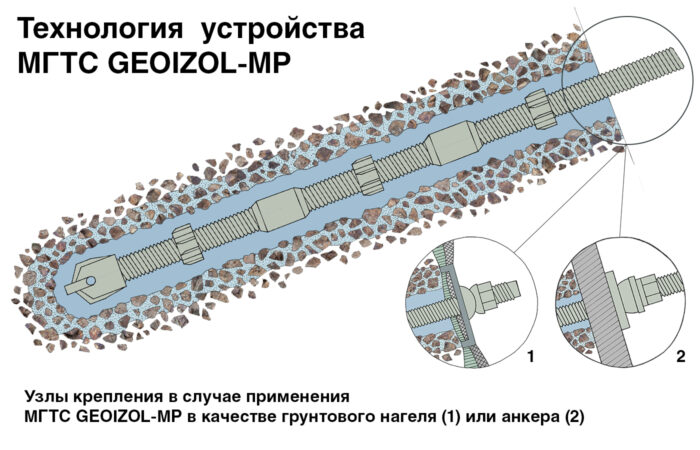 When using MGTS as an anchor for fastening to a structure (for example, on a relieving wall), a pressure slab with a nut or a special slab with a tilt compensation ball or beveled washer is used. When making dowels, claw plates are used (for attaching the integumentary system) with a spherical nut. When installing piles, as a rule, the ledges of the element (head part) are embedded in the grillage.

MGTS GEOIZOL-MP is performed within one technological cycle. A screw rod with a drill bit is used as a drilling and injection tool, and after penetration it remains in the well as a reinforcing element. 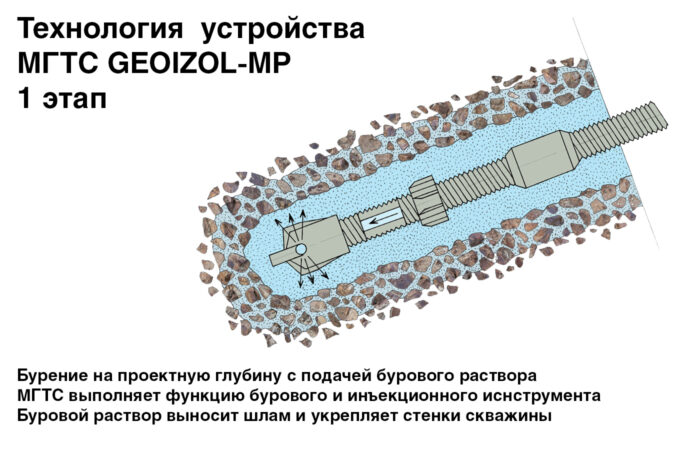 At the first stage, MGTS drilling is performed to the design depth. At the same time, drilling cement mortar is fed into the bottomhole through a tubular rod and a drill bit with nozzles. It cools the drill bit, ensures the sludge removal, and also strengthens the walls of the well, penetrating into the surrounding soil. This allows drilling without casing pipes, including deviated wells. 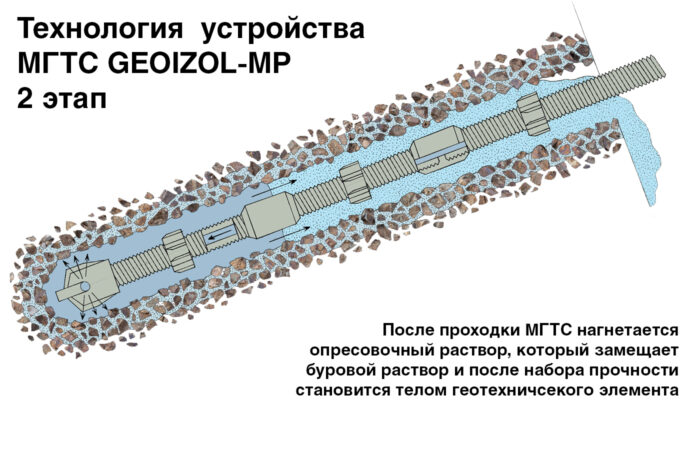 At the second stage, a thick grouting cement mortar is injected into the well, which replaces the drilling mortar, and after strengthing becomes the body of the micropile. The uniformity of the formation of a layer of cement stone is provided by centralizers. The drilling mortar outflow is taken into special containers and disposed of at landfills. 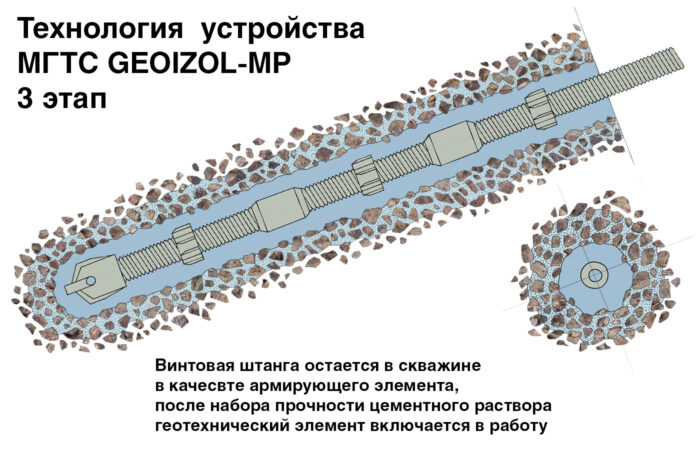 The third stage of the installing MGTS GEOIZOL-MP

A wide range of drilling equipment is used for performed work: self-propelled drilling rigs, suspended equipment for universal and mining excavators, portable small-sized rigs (for drilling in basements and other enclosed spaces), as well as light drilling rigs with the possibility of using them on climbing equipment.

Depending on the specifics of the perceived loads and the tasks to be solved, the GEOIZOL-MP MGTS can be used as a soil dowel, soil anchor, bored micropiles or anchor bar.

Ground dowel – is a nonprestressed rod that reinforces the soil. It is an element of the dowel fastening of the slope. As a rule, a group of inclined dowels (dowel field) is performed with an installation on the surface of the integumentary system.

Soil anchor – serves to transfer pulling out forces from building structures (or fixed objects) into the soil. It is used as part of an anchor group or as a separate holding element.

A root pile is a bearing element of the foundation, which perceives pressing and / or pulling out loads. Provides transfer of loads to a stronger base.

Anchor bar – a device for transferring horizontal force from the front wall to the anchor support or for connecting mutually anchored structures.

Tasks to be solved

Landslide protection. The dowel fastening provides (increases) the stability of the slope (slope). Dowels connect unstable soil layers with underlying stable ones, reinforcing the massif. Sometimes the dowel fastening is supplemented with an integumentary system (various versions are possible), which prevents the soil from falling out in the space between the dowels and provides anti-erosion protection.

Anti-fall protection. The dowels go beyond the zone of possible falling, fix large unstable rock blocks, and on the surface of the rock fall area they are united by an integumentary system of high-strength steel mesh, which prevents displacements on the slope surface and prevents stones from falling. 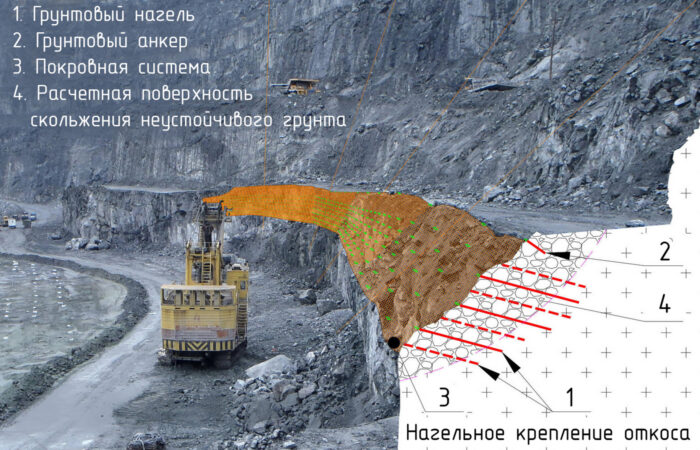 Scheme of the slope protection mechanism

Anti-karst protection. Dowels form a kind of “flexible grillage” – a spatially reinforced soil massif in the embankment body- which allows you to maintain the performance of the protected object with the rapid development of karst processes.

Ensuring the stability of escarpment with the installation of reinforced concrete pressure plates, which create additional pressure (weight) on the soil in the lower zone of the landslide body and increase the restraining forces to fasten a potentially unstable slope or escarpment. The solution is used to ensure the stability of landslide-prone slopes, escarpments and cones of embankments of bridge structures.

Fastening barriers from mudflows, rockfalls and snow avalanches. For the installation of GEOIZOL-MP, light equipment is used, which allows you to work in hard-to-reach places (on mountain slopes) without the construction of access roads.

Fastening of equipment and engineering. For example, to ensure the safe movement of snowcats on steep mountain slopes. 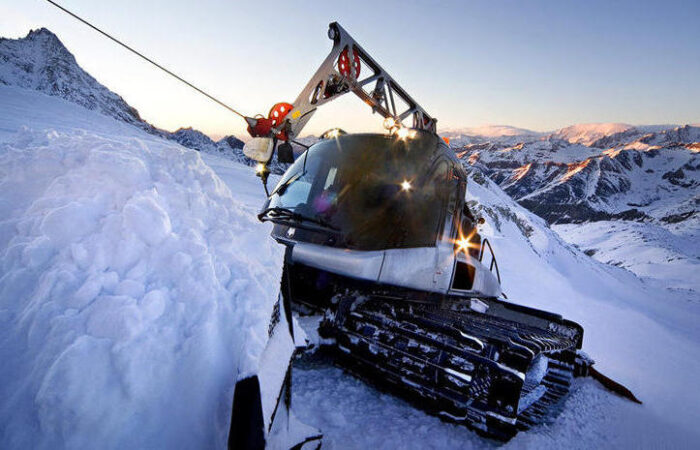 Snowcat on a slope working with a safety rope

Construction of foundations in hard-to-reach places and cramped conditions. GEOIZOL-MP piles are used in the construction of buildings in dense surrounding buildings, the erection of supports for artificial structures without movement restrictions, power transmission line towers on slopes, etc.

Strengthening existing foundations, within the reconstruction and restoration of cultural heritage sites. It is used both to strengthen the foundations of the surrounding buildings when performing zero-cycle works, and when working on the historical buildings. For example, as an auxiliary element when lowering the level of basement floors.

Elements of MGTS GEOIZOL-MP (screw rods, couplings and fasteners) can be used in the installation of new or existing strengthening pit fencing, as well as in hydraulic engineering as a connecting element.

The production of MGTS GEOIZOL-MP is organized at the Pushkin Machine-Building Plant (part of the GEOIZOL Group of Companies). The company operates a mechanical testing laboratory for continuous product quality control. The quality management system is certified in accordance with the requirements of ISO 9001. 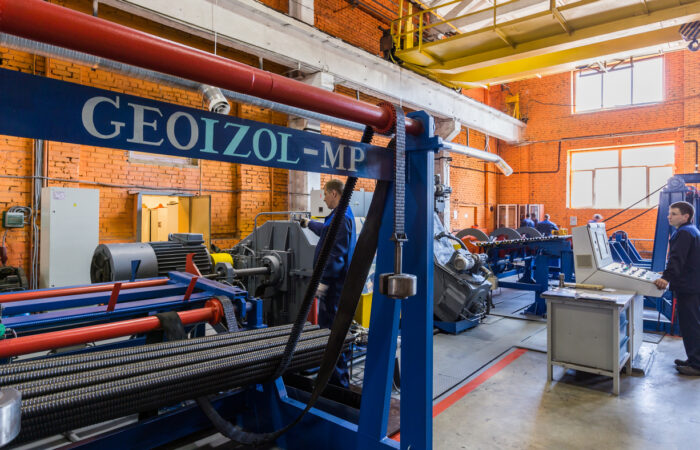 MGTS GEOIZOL-MP has twenty standard sizes in normal and high-strength versions (according to material), but the equipment allows you to make elements according to individual sizes.

The diameter of the screw pipes varies from 30 to 135 mm, and their length can vary from 1.5 to 6 m. The maximum extension length of the geotechnical element can exceed 50-70 m and is usually limited by the capabilities of the drilling equipment. Various types of drill bits are used, which allows you to work in any soil conditions. 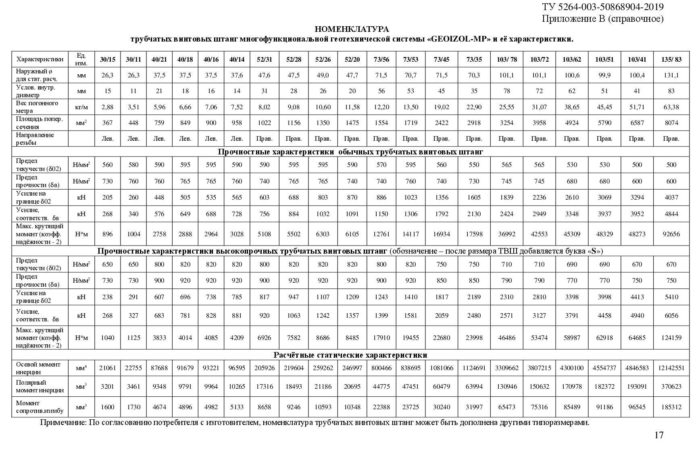 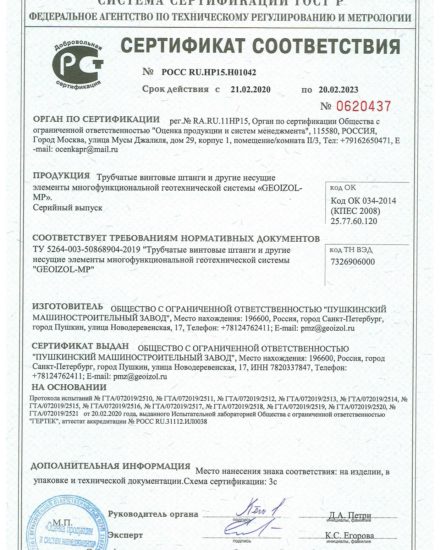 The multifunctional geotechnical system GEOIZOL-MP has received numerous awards and prizes. Among them are the All-Russian and regional competitions “100 Best Goods of Russia”, “Made in Russia”, “Made in St. Petersburg” and “Building Quality Leader”.